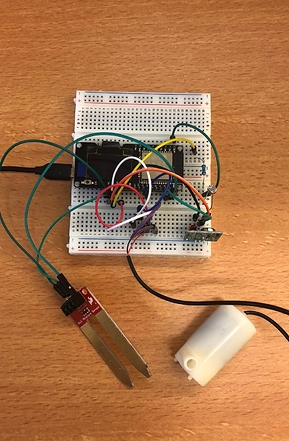 In this part of the workshop you are going to connect the rest of the sensors. At the end of this workshop you will have the following peripherals connected to your ESP:

You will also have some basic programming skills, enough to read out and control all the peripherals.

The basic layout of an arduino style sketch has three parts:

One of the most imported tools for a programmer is comments. Comments are completely ignored by the esp32 so you can write whatever you want. In fact the comments wont even be part of the program that is uploaded to the ESP32.
You can use comments to make your code more readable or to easely disable part of your script when you are troubleshooting

The are two ways of commenting: 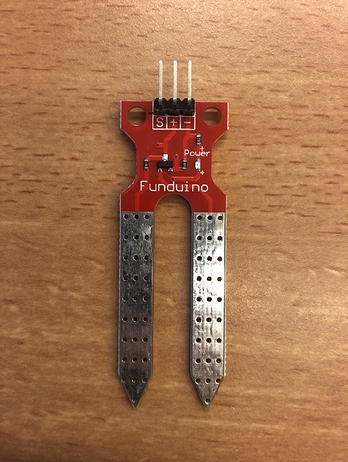 1200×1600 366 KB
The first thing we want to do is use the moisture sensor to monitor the water content of the soil. This enables us to decide when to turn on the pump to water the plant.

Connect the sensor to the ESP32 as follows:

Now we need to update the code.

Upload the code and verify that the sensor works by touching the long metal contacts of the sensor with your finger.

The println function prints the input and start a new line. If you use print instead you can print multiple times on the same line.

In order to make the output a bit more readable you can replace change the print part of the code to this:

Check to see that the serial monitor now displays a nicely readable output.

We not only want to know the humidity of the ground we also want to be able to control it. In the kit you also got a small water pump. The pump allows us to automate the plant watering. This pump will be controlled by a motor driver (as shown in the image below)

The DHT Sensor works by performing a measurement and afterwards sending the results to the ESP32. The following things have to happen to measure this sensor:

A more complete explanation can be found here DHT Explained 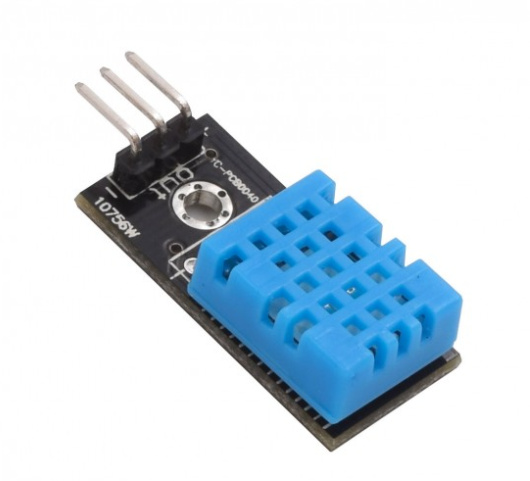 Because we don’t really want to write this code again to decode the response from the DHT we will use a library. A library is a piece of code that you can include in your own project without having to know how it works exactly. You just have to know what the input is, and what the output will be.

Wire up the sensor

There are three pins on the DHT11 Sensor, connect them as described below:

You can install the library using the library manager from PlatformIO. In the PIO Home tab you can click the Libraries tab, and search for DHT Sensor. Click on the DHT sensor library, you will also have to install the Adafruit Unified Sensor library 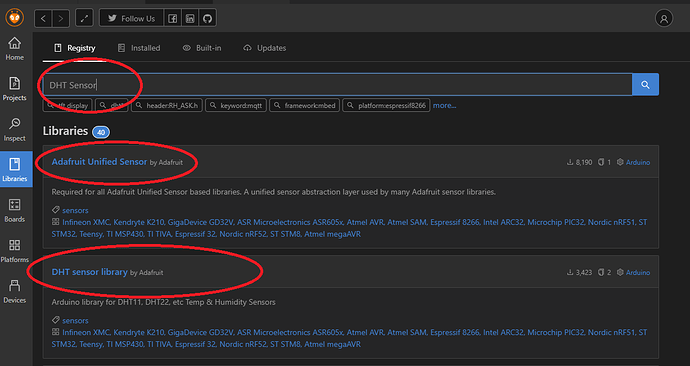 In the next screen you can add this library to your project. Click the Add to project button. 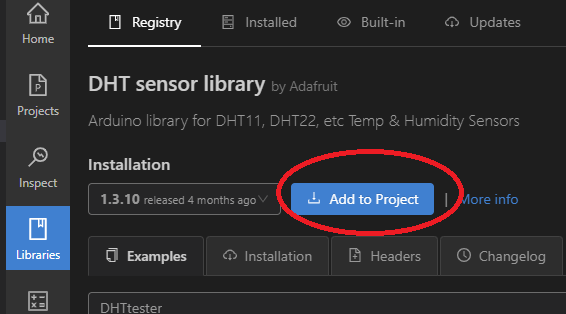 Select your project and press Add. 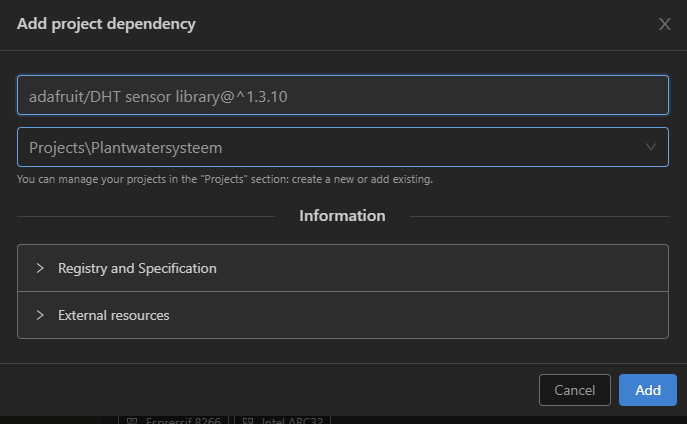 Now do the same for the Adafruit Unified Sensor library.

There is also a working example that you can use to test if everything is working. It is available at the installed library, or (slightly changed) in the code block below:

To control a light above the plant we can use the klikaanklikuit.

Normally you control this unit with a remote controller. We are going to use a 433mhz transmitter and replicate the signal that the remote would be sending.

Wire up the RF Transmitter

In order to do this we first have to wire the transmitter to the ESP32. The transmitter is shown below.
The pin order from left to right is:

Wire the pins according to the table below:

Download the following file and unzip it.
switchKaKu.zip (2.4 KB)

Copy the folder switchKaKu to the lib folder of your project in VS Code. The directory structure should now look like this:

Program your socket with an transmitterId of your choice

Now you should be able to toggle your KaKu by using the following code:

Upload the code to your ESP32.

You are now finished with part 2, congratulations! If you have extra time you can try to do some integration as well.

Now that all your sensors are working independently you can try to integrate them in a single script. Try to combine your code and use inputs (LDR, Soil Moist sensor) to control your outputs (KaKu, relay).